We Own the Night!

Posted by: CaptainDave, on 07/14/2010, in category "Fish Tales"
Views: This article has been read 45181 times
Abstract: Early morning fishing produces plenty of fish in the summertime. 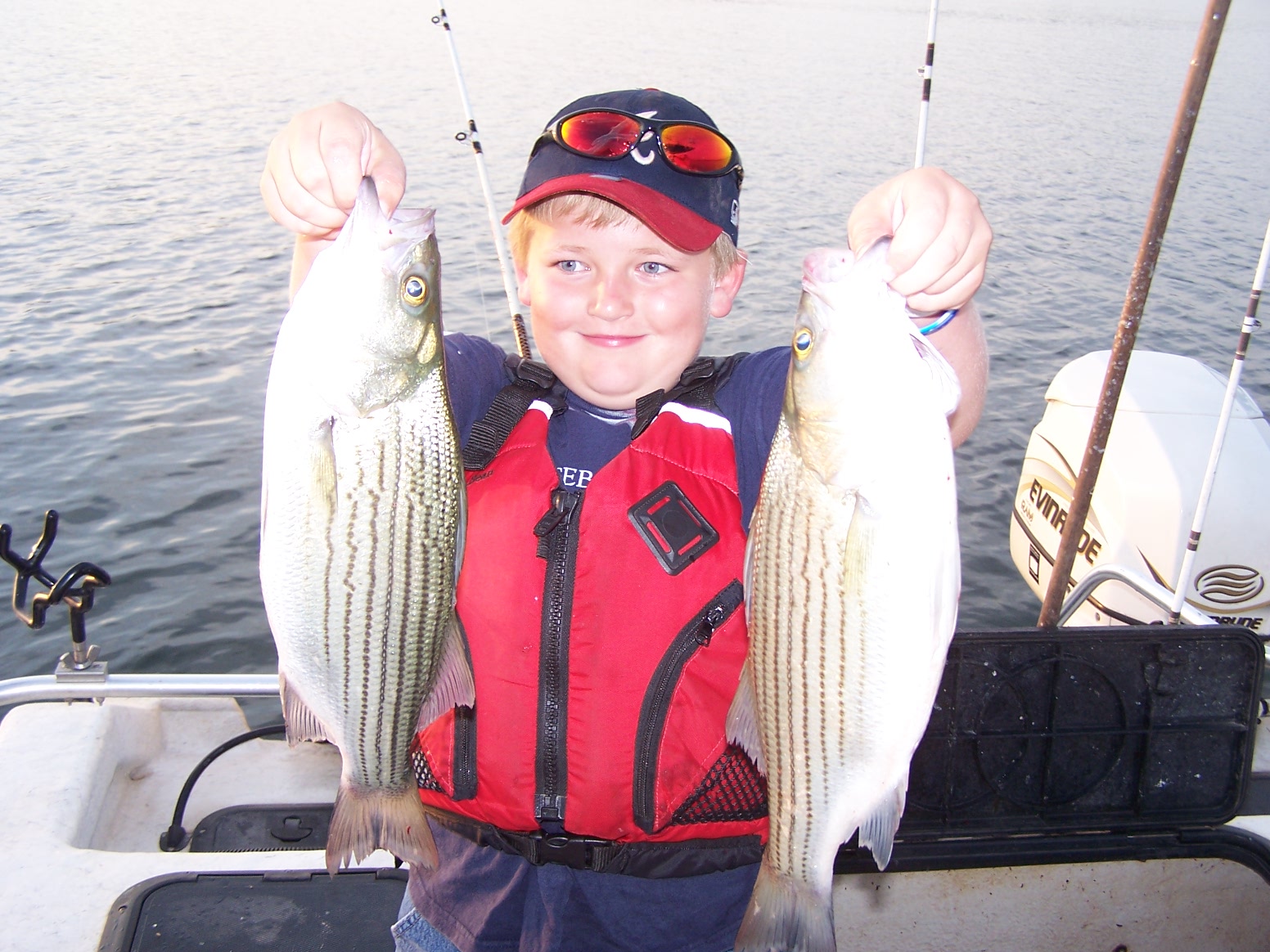 Garrett "Bull" Hammond didn't mind getting up early to catch these fish!
Shortly after the Iraqi invasion of Kuwait, the greatest mechanical assault in the history of combat occurred. As U.S. Forces made an unprecedented advance into enemy territory, their motto was, "We own the night."
Last July I picked up the phone to hear, "Hey Captain Dave, five of my buddies and I would like to go striper fishing."
"That will be fine. What day?" I replied.
After checking my calendar, I gave him the okay and then we got down to the details. "What time can you guys be there?" was my next question.
"Any time you want." was his reply.
"How about 4:00 am?" I said.
Dead silence.
"Hello! Are you still there?"
"Yes," he said, "I don't think we can make 4:00 am. How about 8:00?"
"I can take you at that time, but we're not going to catch any fish." was my reply. It was projected to be near 100 degrees the next day, with no wind. Now that might be ideal conditions for skiing, but it's a recipe for fishing disaster. I explained the situation and also how my boat is equipped for night fishing. He talked it over with the fellows and allowed as how they could possibly be there at 5:00. Next morning I was at the dock, with a tank full of live blue back herring, raring to go. 5:00 a.m. passed, then 5:15, then 5:30. I was starting to get a funny feeling. At 5:35 a car pulls up and out steps six retired gentlemen. As they leisurely strolled to the dock I saw that they were each holding coffee cups and boxes full of dozens of donuts.
"Want a donut?" one asked.
"No Sir."
"How about some coffee?" from another.
"No Sir. You guys are running late."
"Yeah. We like to never found a place open with fresh donuts."
I tried to gather myself and not do my Captain Cranky impersonation. "You guys still wanting to catch some fish?" I asked.
They allowed as how they did.
"Then you might want to get into the boat and hold on to your donuts." I said.
I was starting to see the first hint of red glow in the eastern sky. I went from my big motor to my trolling motor as we eased up on a 40 ft. hump off the main river channel. As the sonar indicated 38 ft., the screen went dark with bait and game fish. While passing out rods, I realized that everyone was holding a cup of coffee and a donut. So I starting baiting rods and putting them into the rod holders. After baiting two rods and starting on the third, I turned to see both rod tips in the water and no one around. Everyone was up front enjoying the conversation. Someone said, "Let us know when you're ready for a donut!"   Again I tried to gather myself. I heard that little voice inside me, "Watch your tone! These guys are used- at best- to social fishing, not WWF slap down, no holds-barred, blood and guts fish slaying!" Well okay, Captain Cranky or no, here we go- "Get those two back rods! Somebody put this rod down! Put the coffee down! Somebody net that fish! Get the donuts off the bait tank! Rod up front is down! Grab another rod off the T-top!” It was as they say in Hong Kong: A Chinese Fire Drill. These boys wanted to go striper fishing and they were seeing it at it's best. It is impossible to catch fish any faster than we did that morning. We couldn't get the rods in the holder. They put sixty stripers in the boat in ninety minutes. We had dead bait, fish blood, and yes, donuts and coffee, from one end of the boat to the other. The sonar was now clear with no signs of fish. As I thought of how many humps and underwater islands there are and how many places had the same drama happening at the same time I was overcome with amazement.
Now you want to know who really owns the night? The Stripers. 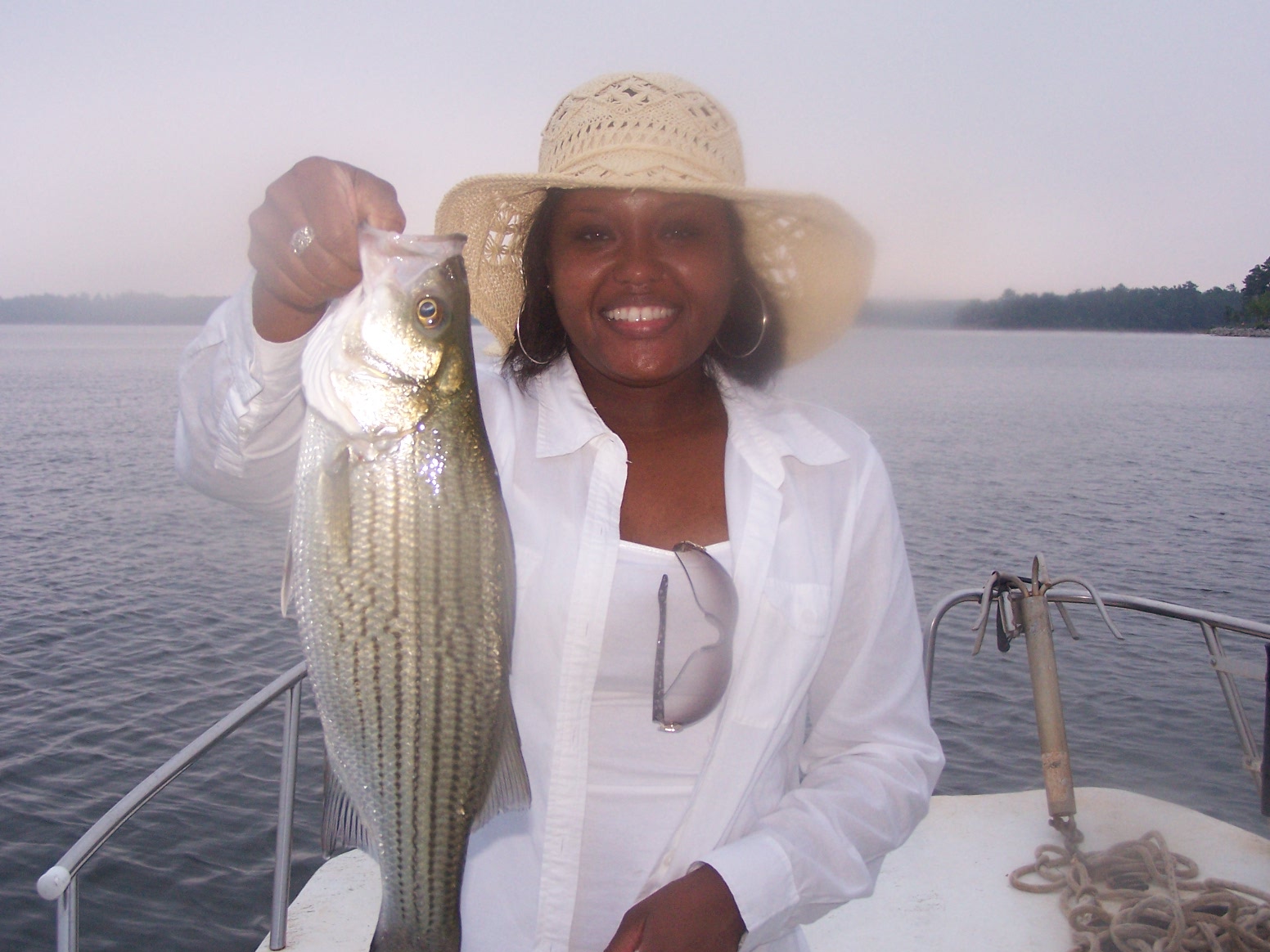 Treva Teachey's smile says it all!