A Time to Fish

Posted by: CptDave, on 05/18/2010, in category "Fish Tales"
Views: This article has been read 45232 times
Abstract: Shallow water fishing in May on Clarks Hill (This is a more condensed version of "Mastering the Flats" with updated information and pictures)

Having spent a few of my formative fishing years in the Keys, I love to fish the flats.  While at Clarks Hill we don’t have miles of tidal flats we can sight cast, we do have areas where the topography remains fairly consistent for hundreds of yards and the depth will hold in the6- to 12- foot ranges before dropping off gradually into a creek or river channel.  These areas are our flats. If the water were clearer, we could see stripers, hybrids and largemouth bass chasing bait fish across these areas.

Now is the time of year to master the inland flats, if you want to be a good striper fisherman.  Locating flats is not difficult.  Topography maps can be used to find large areas of shallow water.

The best areas to concentrate on are large areas at the mouths of feeder creeks, where they empty into the main river or a major tributary of the river.   Next time you are on an undamned river, pay attention to the mouths of feeder creeks: you will almost always see a sandbar there, either above the surface or below it, there is a build up of sediment washed in by the creek.  These sandbars form the flats I’m talking about in a reservoir. The more gradual the slope of the flat, and the farther it extends into the river channel, the better.

On Clarks Hill, some examples of goodflats are in the mouths of Cherokee and Hart creeks on the Little River (Georgia) arm, and Wells, Soap, and Russell creeks on the Savannah River.  You’ll find good flats in every corner of the lake—in fact, there’s probably thousands of them.  In my lifetime I’ll never fish them all.

After locating a potential flat, learn the lay of the land by running the depth finder over and over the area until you know it like your own bedroom. Of course, you want to do this on a day you aren’t going to fish this particular spot and a day when no one else is there either.  Learn the relative depths and where the ledges are.  Learn the structure within the structure: are there any ditches, big rocks, stumps?  How do the fish come and go?  This will take time.

To paint a picture of a fishing trip to the flats, allow me to recall a particular trip not long ago:

First light found us heading up the Little River arm toward one of my favorite flats.  Despite the cool morning air, it was a beautiful run with alight chop from the northwest.  As we drew near, I could just see the outlines of another boat through lifting shrouds of fog.  I hope he’s not on “my spot,” I thought to myself.

There is nothing more conspicuous than a live-bait boat double-anchored on a flat, especially with rods bent double.  Since the river narrows somuch in these areas, every boat that comes upriver passes close by, and we had been spotted by some new guys in the past few days.  They were polite and watched from a distance but must have made a mental note to beat me upriver this morning.  As we came off plane, I tried to size up the situation and determine where the other boat was located.  This is one reason why knowing the flat is so important.

Fishing, above all, is a daily challenge to adapt and overcome.  It can be a hard decision to guess what depth the fish will be in.  Water temperature, light penetration, water clarity, wind direction and dozens of other factors known only to the fish play a part.  This morning it would be an easy decision.  I had to take the deeper water and stay away from the other boat.

I watched the depth finder as we came off the river channel.   I shut the big motor down and went to my trolling motor.  As we came up on the edge of the flat, I saw a ball of bait in 18 feet of water.

After anchoring fore and aft, I cast outlive herring on Carolina rigs as far as I could throw them.  With eight rods fan cast in every direction and placed in rod holders, the clickers on the reels were set.

I took yesterday’s left-over bait from the cooler and began to cut it into little pieces and throw it into the water.

“Why are you doing that?” asked one of the guys.  “I’ve seen it done in the ocean but never in a lake.”

“It’s the same principle,” I said.  “Stripers really like the smell of blood in the water and will follow the scent for a long distance.”

These words of wisdom and other clever comments I made during the first few minutes were still ringing in my ears during the next three hours as we never had a rod to bend.  The only positive note was the other boat hadn’t caught a fish either. Now, I’m a firm believer that the Lord gave us fish to keep us humble,and the most humbling experience I’ve ever had was to have a boat that I’ve never seen before pull up next to me and do everything “wrong” and just slaughter the fish while we just watched.

Thankfully, the other boat had left without catching anything, but I still had two fellows on their first trip for stripers wondering if this wasn’t the worst of all species of fish to go after.

“We’ll give them 10 more minutes,then we’ll try another spot,” I said. Frankly, I figured we were in trouble.  It was approaching midday and I had spent our best fishinghours on the only flat in the lake not holding any fish.   Then I noticed a movement from the front of the boat.  Almost afraid that it was wishful thinking, I slowly began to focus on the left front rod as the tip bent forcefully down and the drag screamed.  With speed that can only come from hours of anticipation, I had the rod out of the holder and felt a solid hookset as I turned to place the rod in my client’s hands.  I stepped back to watch the battle and try to make sure we landed our first fish when I saw the back right rod go.

We had a double on after three and a half hours of zilch.  We landed two stripers, a 10-pounder and a 12-pounder, and then for the next two hours we smoked ‘em, right in the middle of the day.   I can’t tell you why these fish decided to move in at this time.   All week long it had been early morning ‘til midday. Could a huge school have been passing by in the river channel, smelled the chum and decided to check us out? It never ceases to amaze me at all the factors that must come together in order to catch fish.   The more I fish, the more I realize how little I really know and how little credit I can take when successful. I am reminded of words of eternal wisdom – “to all things there is an appointed time and a time for every purpose under heaven”.  A time to fish, and a time to cut bait.     Good Fishing.  Capt. Dave

Clay Mitchell with a beautiful fish he caught this May. 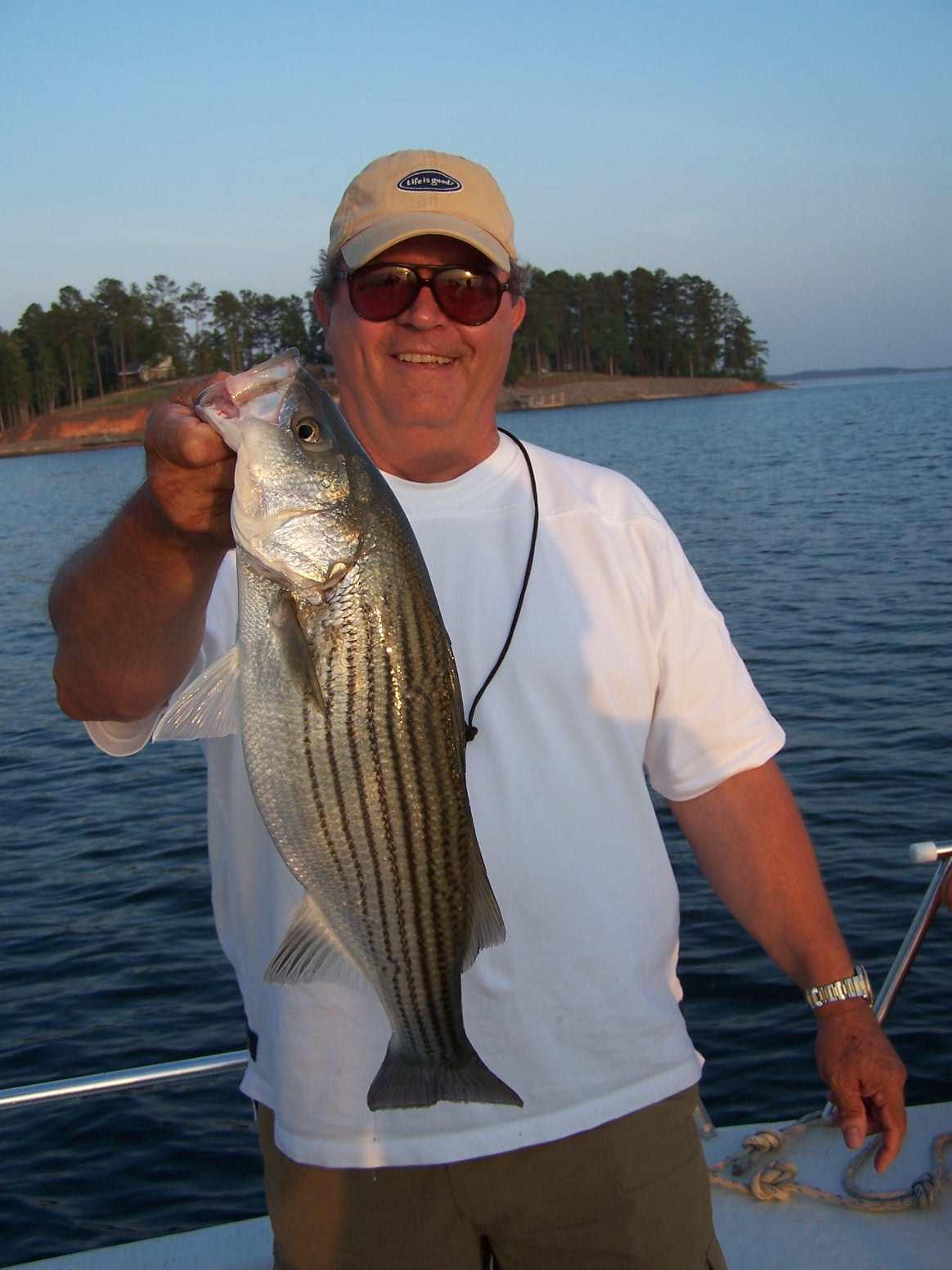 May is one of the best months to enjoy God's creation on Lake Thurmond. 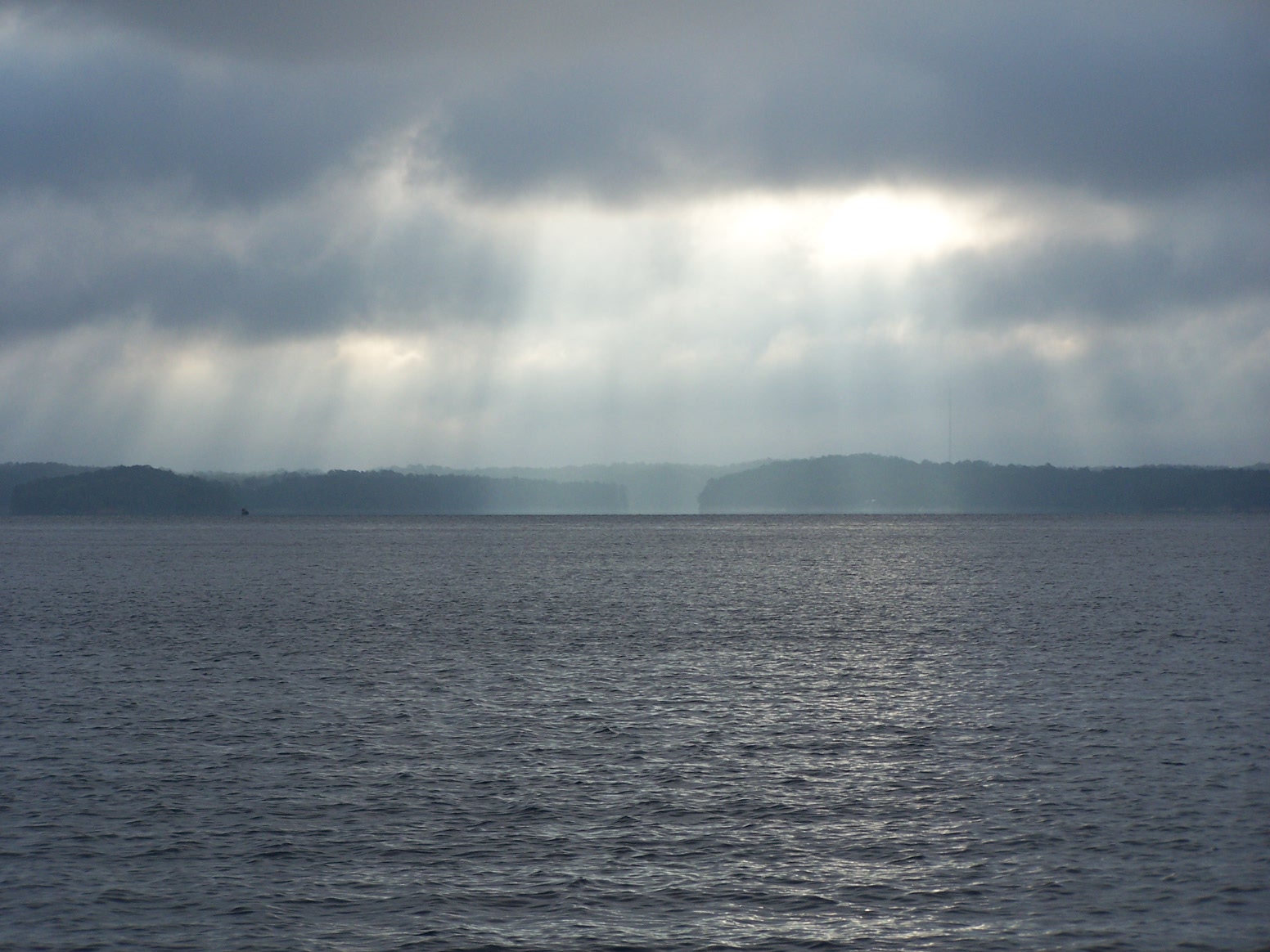 Comment posted by: Charles W. Tant, Jr., on Monday, August 15, 2011 8:01 AM
This is what I have been looking for. Information that can be used to learn how to fish for stripers. Thank you.